A 501(c)(3) organization based in Santa Clarita in Los Angeles County, California, the Santa Clarita Valley Disaster Coalition is an all-volunteer alliance of caring community leaders from the private and public sectors, including representatives from local government, businesses, faith-based organizations, schools, and nonprofits.

The Santa Clarita Disaster Coalition’s mission is to work together as “second responders,” to provide supplemental humanitarian relief to people in our area who need help to rebuild their lives after suffering loss due to a natural disaster, community-wide emergency, or other crisis situation in the Santa Clarita Valley, and, when appropriate, elsewhere in California and the United States.

In the short term, the Coalition strives to provide a safety net for local people in need when they need it most, assisting those who have lost property, providing clothing, new home items, and counseling.

In the long term, the Coalition has worked to help increase awareness of local disaster preparedness and response plans. 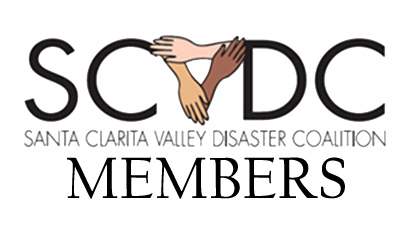 In autumn 2005 and early 2006, in the aftermath of Hurricanes Katrina and Rita, the Goldmans and Green revived the Coalition and engaged other community leaders to join. The expanded Coalition came to include representatives from most of the key players in the Santa Clarita Valley’s public and private sectors.

The Coalition aided the Dubose family, who had moved to Valencia to stay with relatives after their home in Louisiana was destroyed by Hurricane Katrina, and reached out for help.

Five years later, back on his feet, Noel Dubose donated $500 to the organization.

“The Coalition helped us when we didn’t have anything,” Dubose said in August 2010. “Now we are in a position where we could help and this is what we want to do.”

In spring 2006, the Coalition collected 97,000 books from generous SCV donors and the Borders Valencia bookstore. The Sulphur Springs Union, Newhall, Saugus Union and Castaic Union School districts participated in the drive, which organizers Green and Seratti-Goldman dubbed the “Flood of Books.”

Camelot Moving & Storage, also a Coalition member, packed up and trucked the books to the Gulf Coast to help restock the libraries of five elementary and middle schools in Houma, Louisiana, a town in lower Terrebonne Parish that had been flooded by Hurricane Rita.

The schools served more than 13,500 students, and teachers connected with the Coalition via member Frank Ball, a Santa Clarita Realtor who had grown up in Houma.

Adding to the book donations, the drive raised $13,500 in cash (including a $10,000 donation from the city of Santa Clarita) plus about 85,000 book points from Scholastic that could be redeemed for more new books at Borders.

The California Emergency Services Association, Southern Chapter (SCESA) also honored the Coalition with a 2007 Silver Award in 2008 for the “Flood of Books” drive.

Most rewarding, however, was the flood of thank-you letters the Coalition received from the Louisiana students and their teachers whose school libraries were restored by strangers 2,000 miles away.

In fall 2006, the Coalition was among the local groups joining the city of Santa Clarita’s fight to block Mexico-based CEMEX from its proposed expansion of mining operations in nearby Soledad Canyon, a goal the city ultimately achieved in 2015 with help at the federal level from California’s U.S. Senators.

The Coalition assisted the nonprofit New Leash on Life animal rescue, retraining and adoption organization in Placerita Canyon after a wildfire in September 2006, via community outreach to raise funds and supplies to repair damage at the facility.

After the devastating Buckweed and Ranch wildfires struck the SCV in October 2007, burning right into populated areas of Canyon Country and destroying 22 homes, the Coalition collected and disbursed more than $100,000 in donations and grants to aid families whose homes were damaged or destroyed.

Kristelle Padilla, a student at Alemany High School in Granada Hills who recruited her classmates and friends and raised $350 to help their friends one valley to the north. Frank Ferry, then Alemany principal and Santa Clarita’s mayor pro-tem, matched Padilla’s donation, doubling it to $700.

Devon Nelson and Daniella Villano, fifth and fourth-graders, respectively, at Castaic Elementary School, took up a collection and donated 60 blankets to the Coalition for distribution to fire victims who had lost their homes.

Even the Los Angeles Kings helped out by donating a portion of proceeds from a game to the Coalition for fire relief.

Jim Tindall, caretaker at Heads Up Therapy on Horseback in Bouquet Canyon, lost his home and was severely burned in the Buckweed fire. But with help from the Coalition, including members Habitat for Humanity of the San Fernando-Santa Clarita Valleys and the Southern California Gas Company, Tindall and his family made it through the crisis.

“It’s a very good feeling to know there are people are out there who will help you out when a disaster happens like that,” Tindall said in 2010. “It makes you feel good about this community and the people in it.”

‘A Brush with Kindness’ Home Rehabs

The Coalition teamed again with the local Habitat for Humanity chapter for a program called “A Brush with Kindness” in late 2007 and 2008. The program was designed to help low- and middle-income families rehabilitate their homes damaged by fire, smoke or water.

Coalition funds helped pay for external repairs, flooring replacement, and paint – hence the program’s name – and the organization’s volunteers provided all the skilled and unskilled labor for several “A Brush with Kindness” rehab projects on local residents’ homes.

At that point the Coalition was working with 27 families as well as the Heads Up horse therapy ranch and Lombardi Ranch, both severely damaged by the Buckweed fire, which was sparked by a 10-year-old kid playing with matches in Agua Dulce.

One warm night in summer 2008, the Coalition and Mountasia in Santa Clarita hosted a special night out at the entertainment center especially for Buckweed and Ranch fire survivors and families who’d lost their homes.

“The goal was to bring them together for a fun evening where they could bond, share their experiences and draw strength from each other,” said Diane Green, who coordinated the outing. “There was lots of hugging and happiness, and really, just a lot of fun in a relaxing environment.”

Two years later, the Coalition sponsored free counseling from the Santa Clarita Child & Family Center to bystanders of the July 4, 2010 tragedy in which an out-of-control car plowed into a group of parade-watchers in Valencia, killing one.

After Hurricane Sandy slammed the East Coast in October 2012 and served as yet another reminder that disaster can strike anywhere anytime, the Coalition joined the city of Santa Clarita and mounted another effort to further boost local preparedness for natural disasters like fires, floods and earthquakes.

Today, the Coalition operates under its own 501 (c)(3) incorporation

The Coalition has continued to receive generous donations from individuals, businesses and grant sources over the last few years, a period of relative inactivity.

Since its inception, the Coalition has saved all funds ultimately not used for wildfire disaster relief, in order to be well-prepared for the next unseen disaster.

In early August 2016, as officials mopped up the last of the Sand Fire’s hot spots, Coalition members were already assessing the fire’s impact on the Santa Clarita Valley, and working on ways to raise additional funds to provide supplemental assistance to fire victims where needed.

Santa Clarita News By KHTS AM 1220